6 Festive November Holidays Around the World

Thanksgiving is a popular November holiday.  However, it is only celebrated in the United States. So what is the rest of the world up to in November? Below are five other November holidays from around the world, plus several translations of the English phrase “Happy Thanksgiving” in order to demonstrate the role of localization and cultural context in translation (or so you can impress your family and friends with your linguistic knowledge over the dining room table this year)!

How Do People Celebrate Thanksgiving Around The World? (Hint: They Don’t…)

Thanksgiving 2016 is fast approaching the United States, and while people across the country are preparing their feasts we can’t help but wonder what other November holidays around the world are being celebrated. Below are 6 traditional Holidays from around the globe, bringing cheer and celebration to people everywhere this November! 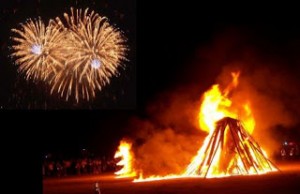 Movie fans will certainly remember this from “V for Vendetta”. The tradition started in 1605, after a failed assassination attempt of the protestant King James I. The following year people were allowed to celebrate the survival of their king with a day off and bonfires – though other sources suggest that it was used as a replacement of Celtic Samhain traditions. The past religious associations however have lessened over time and today it is mostly a time to celebrate with friends. “El Día de la Tradición” or “Day of Tradition” is the last day of a whole week of celebrations filled with concerts, parades and parties in Argentina, showcasing different aspects of the country’s culture. November 10th, is held in honor of the birthday of the celebrated Argentinian writer and a 19th century gaucho, Jose Hernandez. The term “gaucho” simply refers to a person in Argentina or Uruguay that herds cattle – in other words a cowboy. Hernandez was a self-taught writer and poet, and the author of one of the most important pieces of Argentinian literature: “El Gaucho Martin Fierro”. “Narrentag” or “Foolsday” in Germany, Switzerland and Austria, is the begining of the so called fifth season which lasts through the period of Lent. A time for “fasching”  or “fasting”, most celebrations take place in January or February of the following year, with many regional differences. To this day, every child learns exactly when the carnival season begins because it is not just on November 11th, but rather on the 11th day of the 11th month at precisely 11:11 AM and 11 seconds! In Japan, “Shichi-Go-San” or “Seven-Five-Three” is a celebration of the rite of passage of young children for their continued growth and well-being. The celebrations are centered around boys between the ages of 3 and 5 and girls between the ages of 3 and 7. Children dress in traditional kimonos, or western formal wear, and visit shrines with their parents. One of the favorite traditions for the children of course are the gifts of “Chitose Ame” or “Thousand Year Candy”. These candies are typically long, red and white symbolizing health and longevity, and are gift wrapped along with a crane and a turtle which also represent long life. During the rainy season in Cambodia the Tonle Sap River overfills and reverses its flow. The  festival of “Bon Um Touk”, or translated from Khmer into English the “Khmer Water Festival”, celebrates the return of the river to its normal direction. This takes place on the full moon of the Buddhist month Kadeuk which is usually in November, and lasts for a period of three days. The main festivities revolve around boat races, fireworks, traditional moon salutations and spending time with friends and family at the festival grounds beside the Tonle Sap River.

Thanksgiving in the United States is celebrated in a variety of ways. Some of the hallmarks include the famous Turkey dinner and the Macy’s Thanksgiving Day Parade, featuring larger than life charcter balloons and floats making their way through the streets of New York City. Thanksgiving, although the most popular November holiday in the United States, is not celebrated in any other country in the world – with the exception of Canada that celebrates it in mid-October. However, this does not mean that other languages do not have thanksgiving translations. To demonstrate the important role that localization and cultural context play in translation services, we have provided some translations of the English phrase “Happy Thanksgiving” below.

Thanksgiving Translation Examples from Around The World

While some translations of the U.S. holiday may flow easily, others may sound awkward because of the fact that they are a direct translation from the English and don’t have a true language equivalent in another language.

Take, for example, the Polish Happy Thanksgiving translation“Wszystkiego najlepszego z okazji Święta Dziękczynienia”. In order to achieve the Polish equivalent, a very lengthy description of the English phrase must be used.

In some languages the words “good” and “happy or merry” may be interchangeable when refering to a holiday. For example, in French the phrase translates either as “Bonne Action de Grâce” (with Bonne meaning good) or “Joyeux Action de Graces” (with Joyeux meaning happy) depending on your preference.

Happy Thanksgiving from all of us at Language Connections!